Art book fair and hanging out with beautiful books

Art book fair featuring local and international independent and micro-publishers, and a meeting of designers, illustrators, photographers and artists.

Organised in collaboration with Look Back and Laugh

36 MOUNTAINS is a Croatian festival dedicated to illustration. The goal of the festival is to bring illustration and drawing closer to the public, to showcase the best of the domestic and global scene and to bring recognition to young and up-and-coming artists, while the format veers away from the typical approaches found in galleries and museums. Their first concept was to present the work of artists in the form of concertina notebooks, but in the last few years they have started doing limited runs of screen-printed editions.

585 ZINES is a joint project of photographer Tadej Vaukman and artist Sonja Vulpes. They are active zine publishers - zines and artist books play a big role in their art. While they started off as a platform for showcasing their own work, they occasionally also publish the work of other people and friends whose work they like. They usually don’t make big plans, they just publish new stuff when they feel like it.

Atelier McLane are Julia and Hugo from Rennes, France. They incorporate drawing, photography and typography in their screen-printed posters and zines. Their work is often dark, based on different shades of gray or just black, but always superbly composed. They derive the narratives for their work from society’s darkest moments and corners, but they are never direct, they always deliver the punch in an almost poetic way.

Beli Sladoled are an artist duo comprising of Leon Zuodar and Miha Perne. Their adage is: being dead serious about not being serious. Primarily educated as painters, they look for any excuse to do weird, funny drawings on as many different surfaces as possible. These often end up in various zines, books and other printed ephmera. They also share a mutual love for wild facial hair.

Horrid Habits is the artist name of Jaka Vatovec. Jaka is an academically trained painter, but his work often finds its way into other printed matter. His visual style is defined by the grim gesture of his recognisable drawing style which he often merges with collaged paper scraps. He gets his inspiration in the weirdest parts of the internet you can imagine. In the last few years he has also been working as a graphic designer for different metal and punk bands.

Knust was founded in 1984 by Joyce Guleij & Jan Dirk de Wilde in de Westland, a former squat in Nijmegen. They started as an independent stencil printing studio and remain one to this day. Due to their early involvement in stencil printing, they are probably two of the biggest experts in the field of risograph printing and similar techniques. They are part of the Extrapool collective and they also do work as small press publishers.

Komikaze is a Croatian publishing platform founded by Ivana Armanini. Focused on comics, but with a special zing. Their focus is on experimental comics and illustration and they publish a couple of book editions every year, while also actively maintaining their webcomics activities. They also have a special series called Femicomix through which they present female artists and tackle feminist themes in the format of comics and zines.

Lagon is a French bilingual comic book magazine that explores new ways of graphic narration through the format of a book. Since 2014, they have published five different volumes, the last being Marécage from 2019. Their books are comprised of the work of many different artists and are always printed in an absolutely crazy way, usually using several different techniques and papers.

Lealudvik is a project by Lea Jelenko and Matjaž Komel. They actively work in the media of video, graphic design, illustration, animation and zines. In their joint project, they explore what intimacy and partnership can look like through the prism of art. Their work is a nod to sadomasochistic practices, rituals and other themes that lie in the shadows.

Look Back and Laugh is a small publishing house based in Ljubljana, Slovenia. The primary focus of LBAL is to publish our own work as well as work we respect and like. We collaborate with very different artists, from illustrators, painters, graphic designers and photographers. The first editions explored what a zine can be and how the form can be explored and turned around. In the last couple of years we try to go beyond those limitations and while we still try to do the most of the process by ourselves, we try to merge the line between zines and artists’ books. Since Look Back and Laugh also shares members with riso art collective Riso Paradiso, most of the last editions were printed with risograph duplicator. Apart from that we always try to experiment with different bindings, paper and format.

Nevena Aleksovski is an academically trained painter who works in various fields, from zines and drawings to collages. Her minimalistic approach usually revolves around the line and some text, but she nevertheless manages to be extremely expressive in her work. Through her motifs, she usually tries to draw attention to topics like body positivity, feminism and being OK with everyday boredom.

Nez Pez or Neža Jurman as her mother and father call her, is an artist of many different practices. Educated as a sculptor, she mainly works with paper, either screen-printing on it or drawing a hundred tiny doodles on it. She is also known for her interactive installations and video projects.

Hosting the Institute of Design, home to the Silence band, and representing choreographers Matej Kejžar, Mala Kline and Leja Jurišić, the Pekinpah association brings together internationally acclaimed designers, theorists, architects, choreographers, dancers and musicians.
Established in 2007, the Ljubljana-based Pekinpah has facilitated artistic, cultural and scientific creation, developed theoretical discourse, as well as organised numerous events and research and education activities. Pekinpah has always aimed at deepening and upgrading these areas of cultural production, while strengthening the theoretical discourse within Pekinpah's spheres of interest.

P.U.N.C.H is specialist publisher and bookshop based in Bucharest, with thematic focus on theory and contemporary practices in art, architecture, design and connected fields. Special services can be offered to galleries, organizations and institutions upon request.

Ravnikar Gallery Space is run by Piera Ravnikar. In less than two years, the small gallery has made enough noise to firmly secure a spot on the Slovenian art scene. Piera mainly shows the work of emerging Slovenian artists, but sometimes also exhibits work by foreign artists. One of her more notable projects is R / EDITION, which involves the production of limited editions in collaboration with various artists.

Riso Paradiso is a collective that consists of five different characters: Urška Alič, Mina Fina, Nejc Korenič, Jure Šajn and Zoran Pungerčar. Even though their backgrounds, namely illustration, graphic design, screen printing and even tattooing, are very different, they have found common ground in the holy practice that is riso printing. Riso machines allow them to produce their own work as well as collaborate on different projects. They occasionally also make prints for others and do workshops.

Rostfrei Publishing began as a platform highlighting inspiring, critical and inventive art. It’s run by graphic designer Boštjan Pavletič and Slovenian photographer Jaka Babnik. Their main focus is on art photography books, but they occasionally veer off with books like Take Three Deep Breaths by Emir Šehanović or Color by Emina Djukić.

Simon is a painter through and through. His life and career are connected to paint and brushes in one way or another, but when he gets tired of them, he often turns to paper. While his paintings are often characterised by obscure figurativism and large shapes, his drawings embrace the line much more prominently. Often using the copy machine as his way of expression, Simon is known for combining dark, weird toner creations with high-contrast paper in cute colors. This guy likes his paper pink and blue.

Stripburger are definitely one of the oldest comics institutions in Slovenia. They started walking the walk in distant 1992, the year Whitney Houston released her smash hit I Will Always Love You. While they publish two issues of their magazine annually, they also publish special editions each year.

Urška Alič is a graphic designer, screen-printer and an active weekend hiker. When not in the mountains or behind her computer, she can be found in her garage screen-printing or behind a riso machine. In the last few years, she has been actively publishing her work in the form of fanzines, shirts and other functional objects. 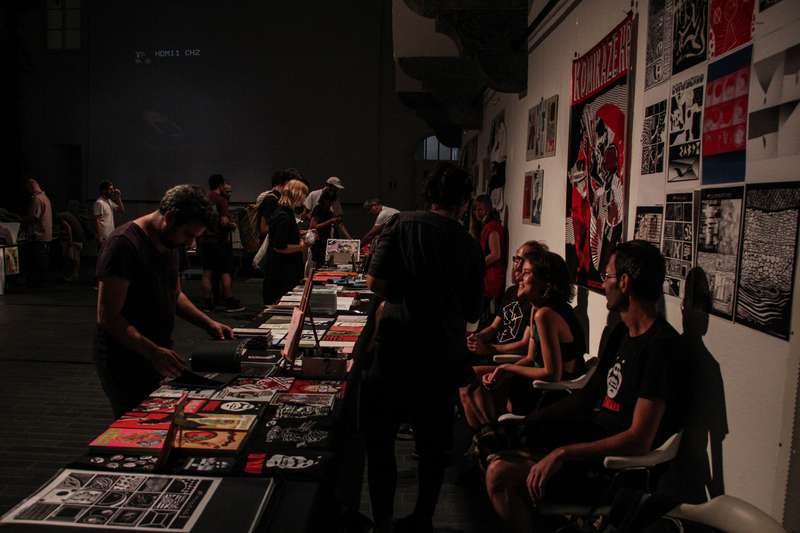 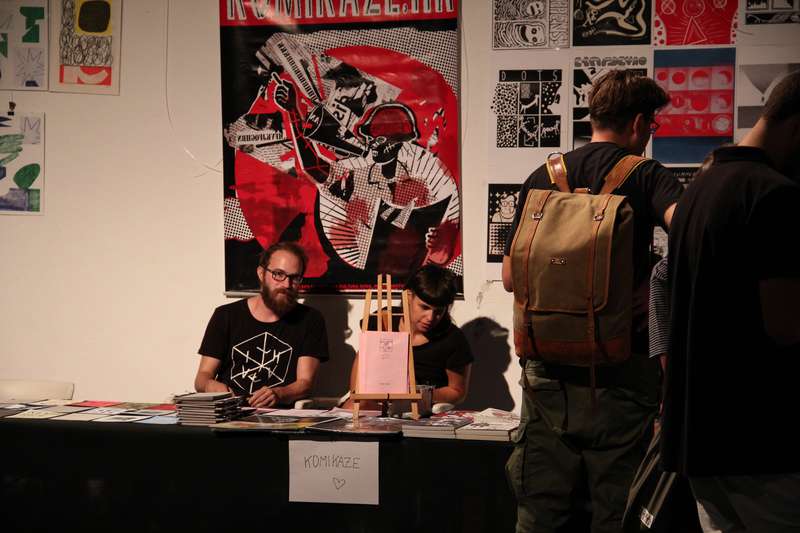 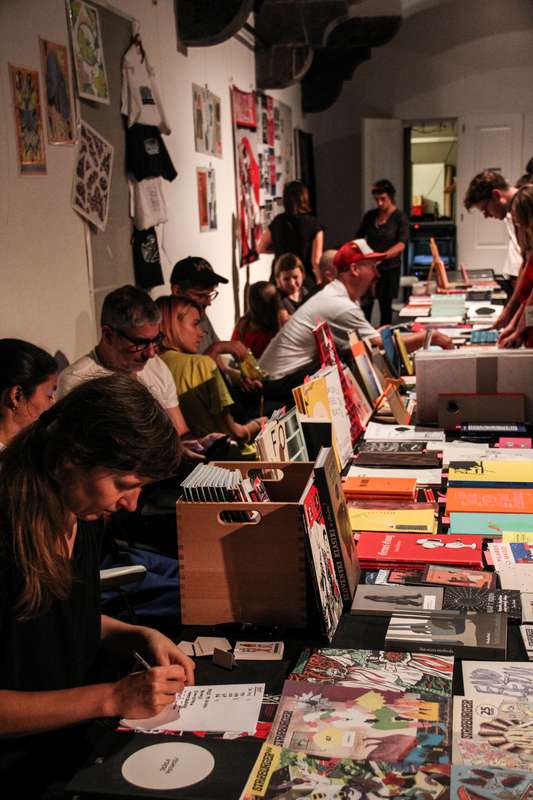 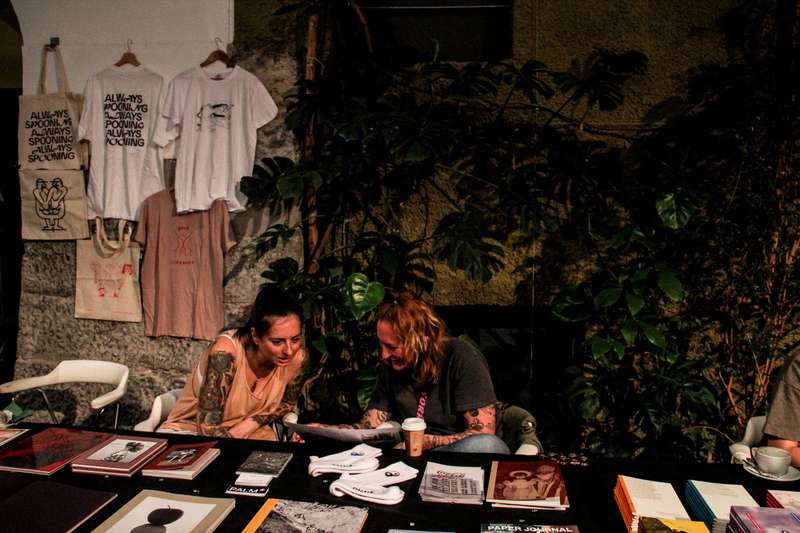 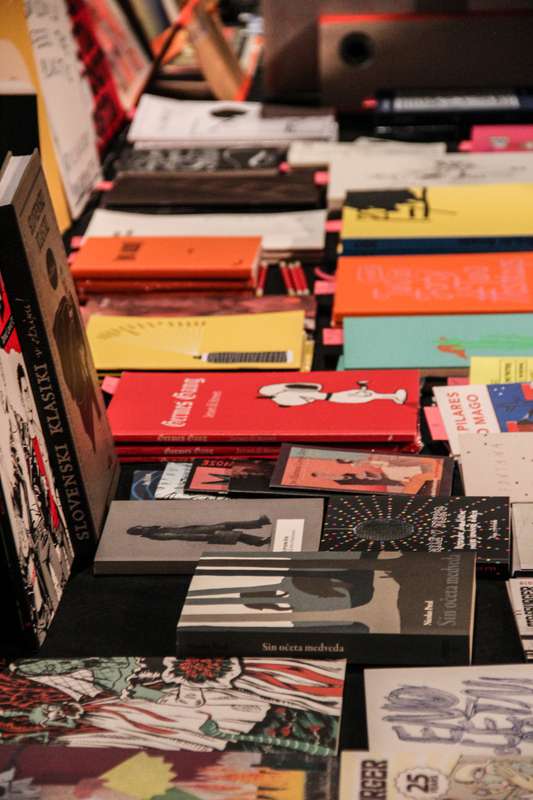 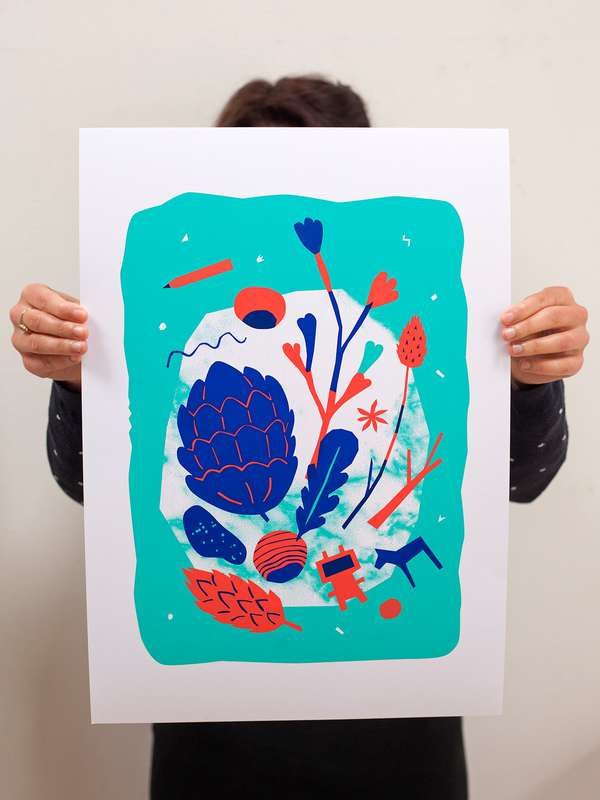 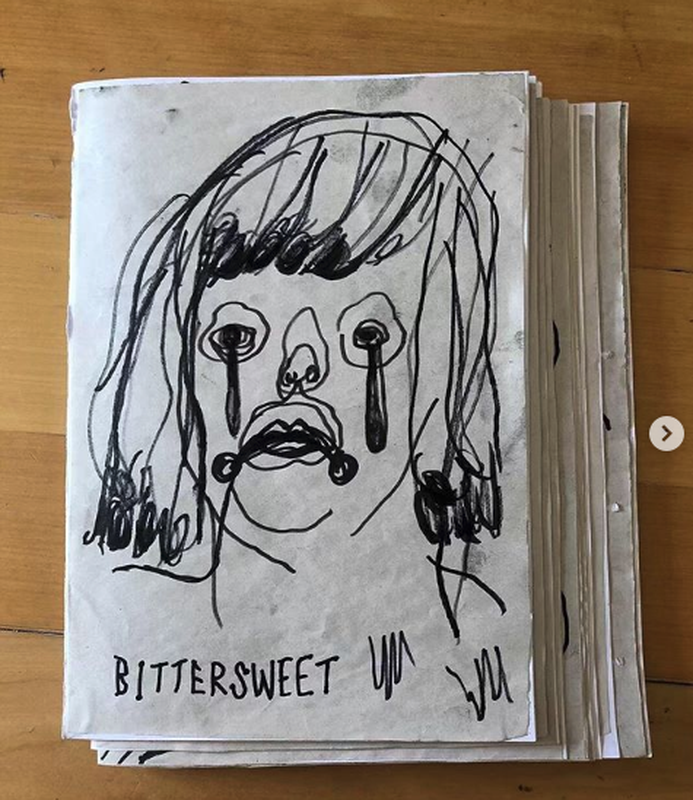 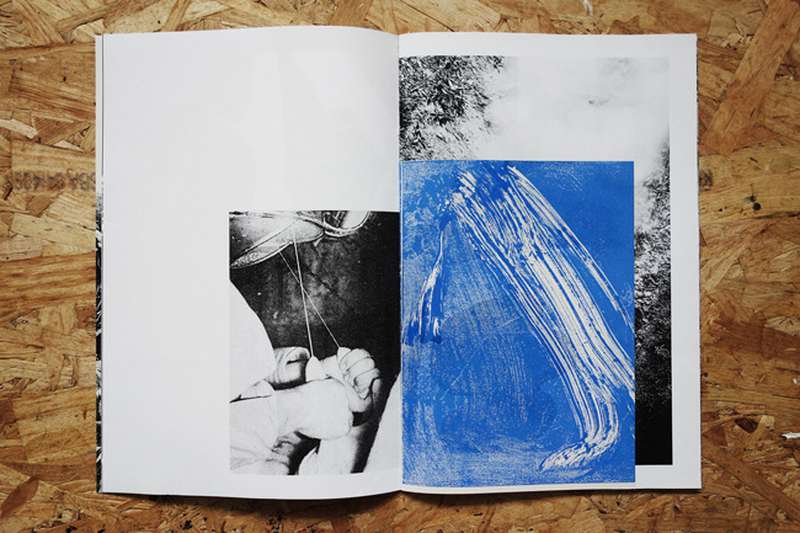 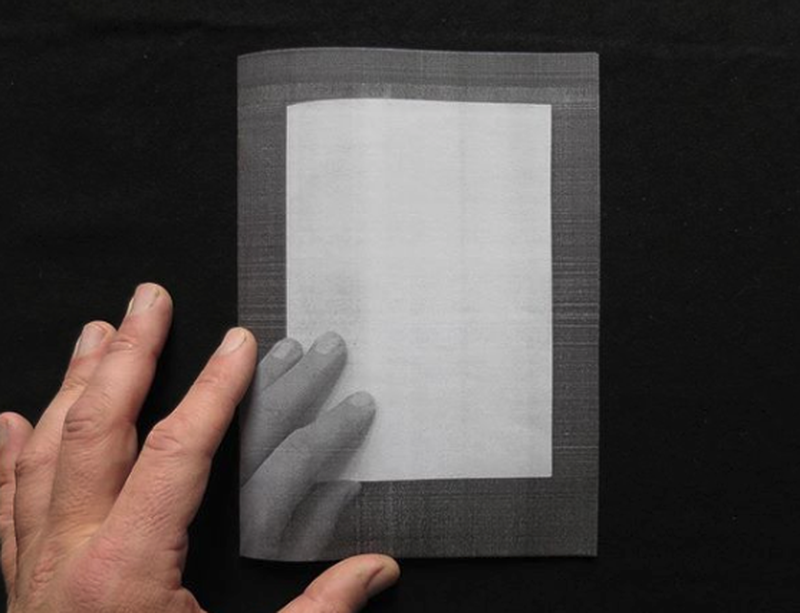 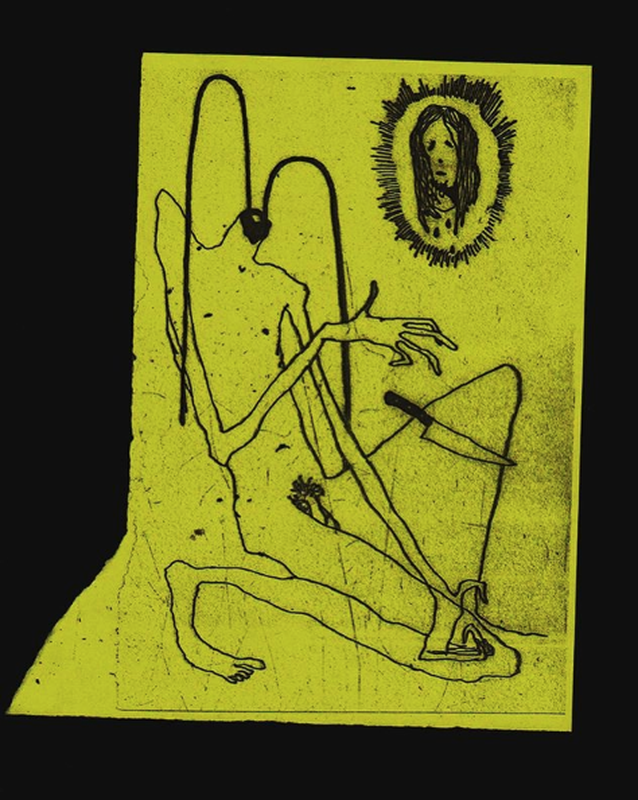 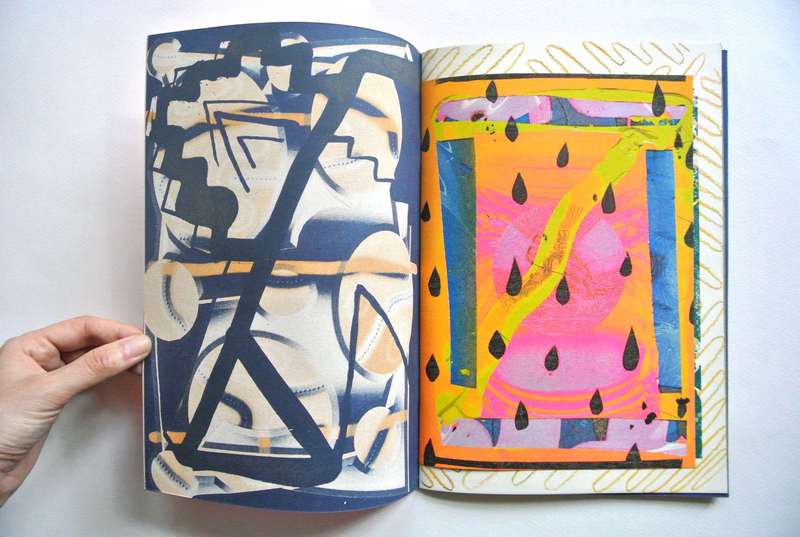 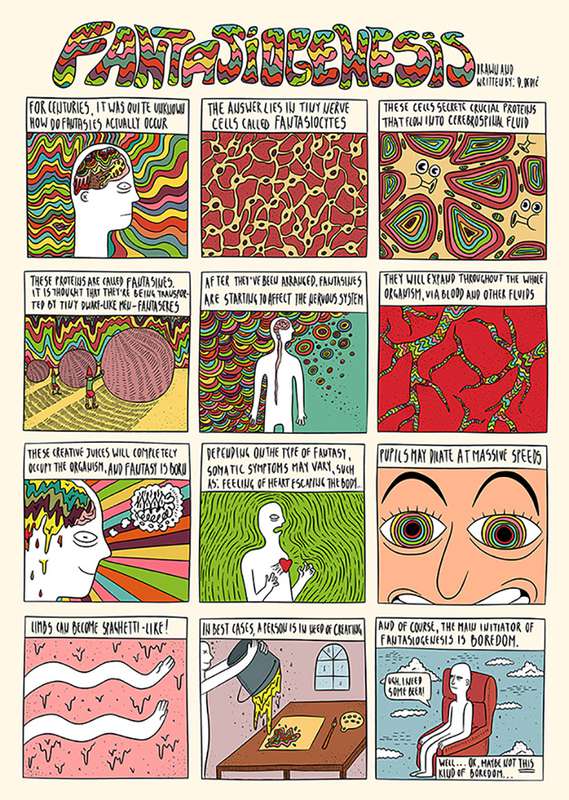 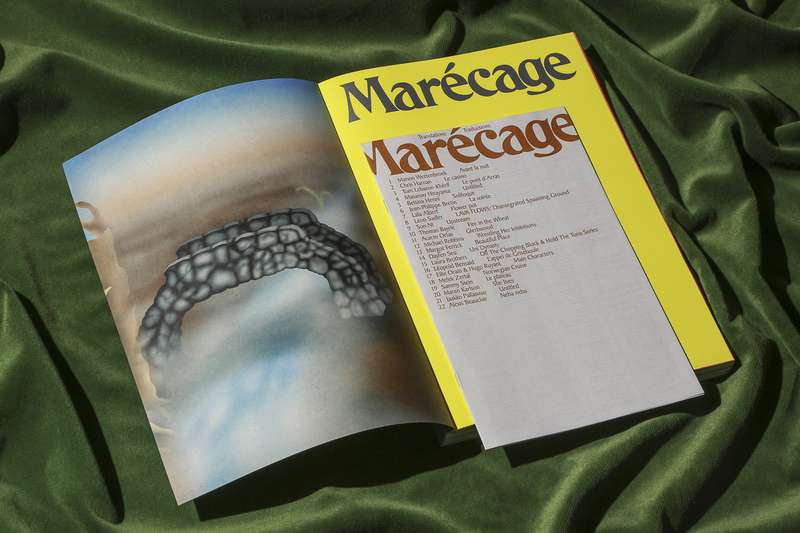 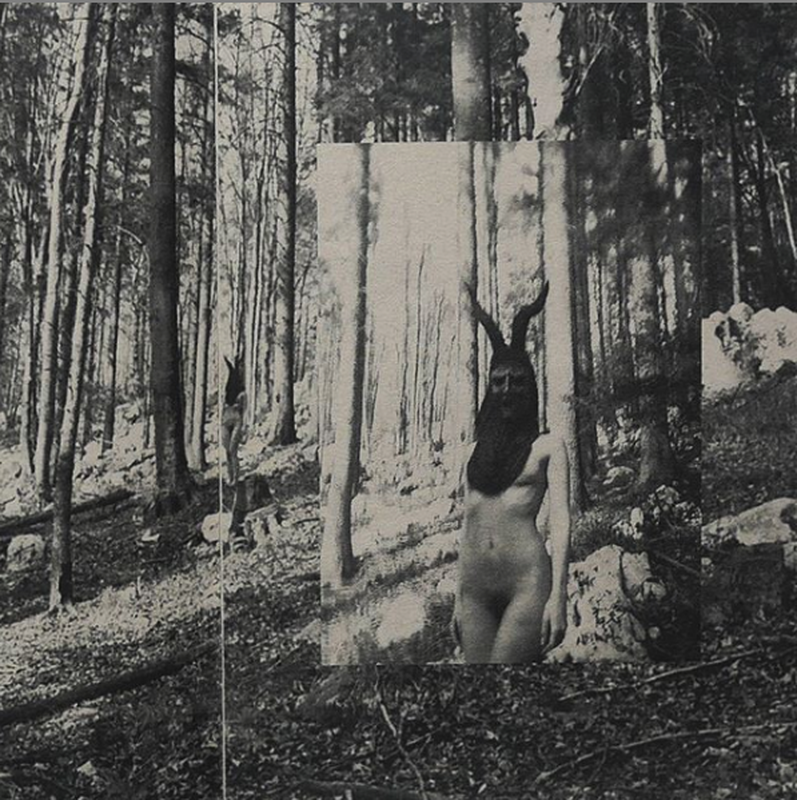 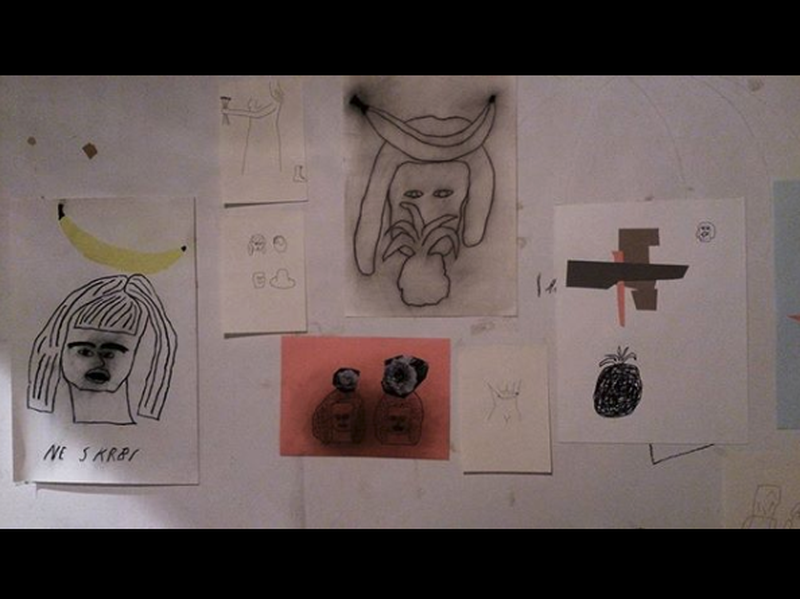 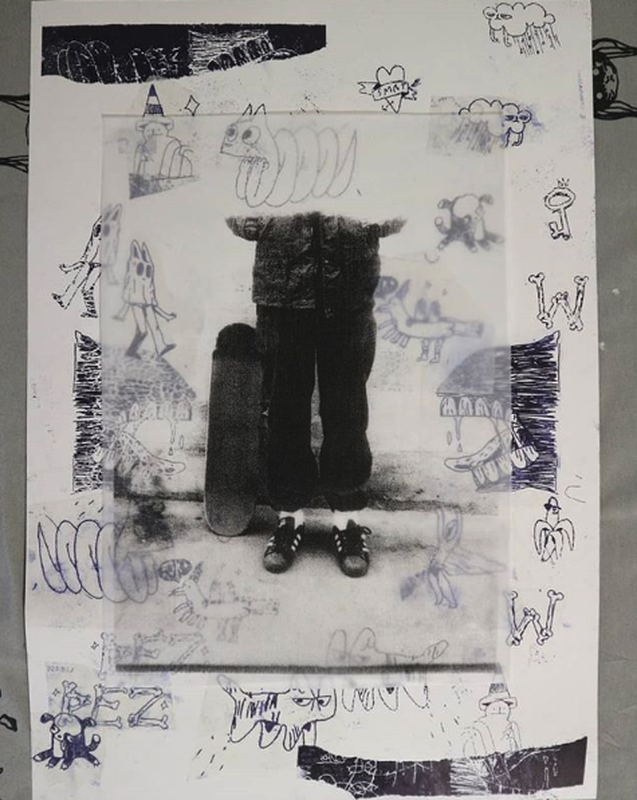 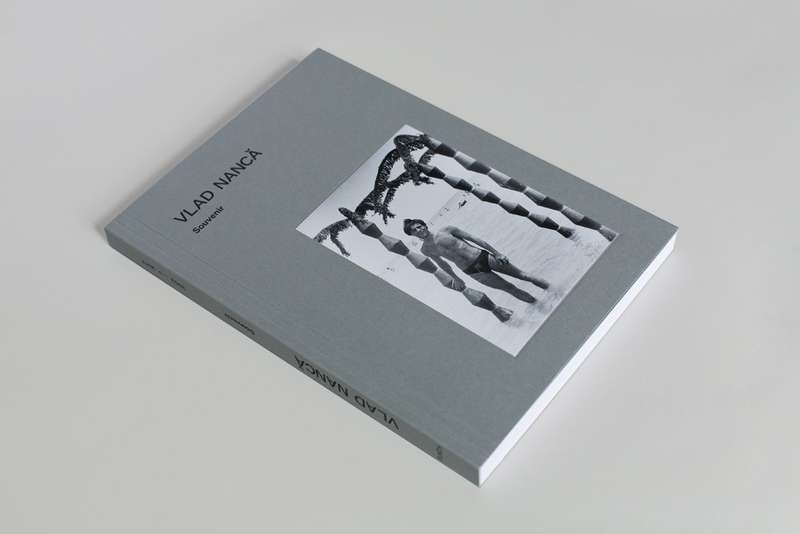 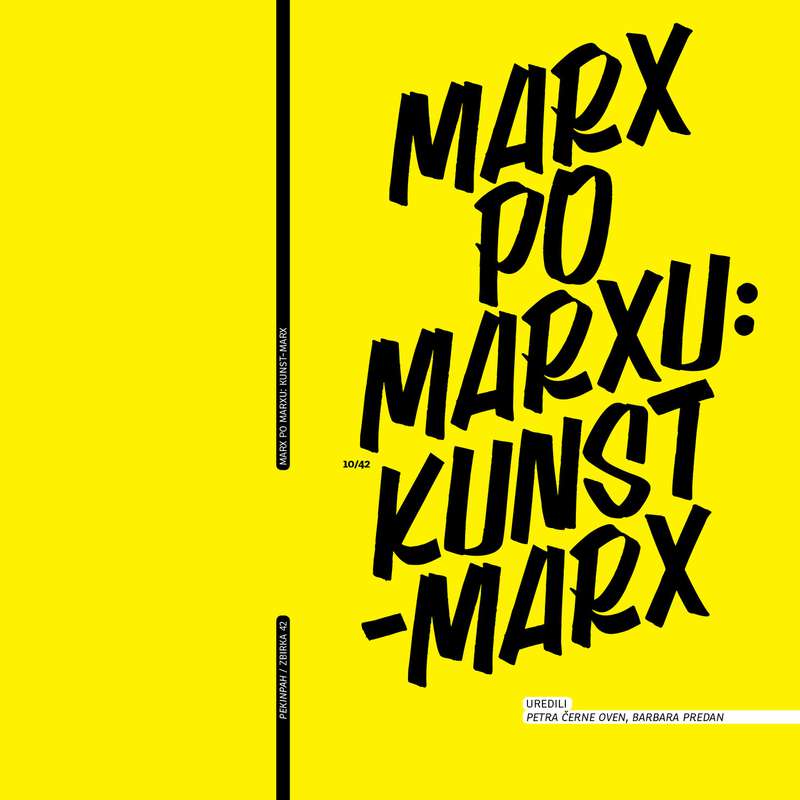 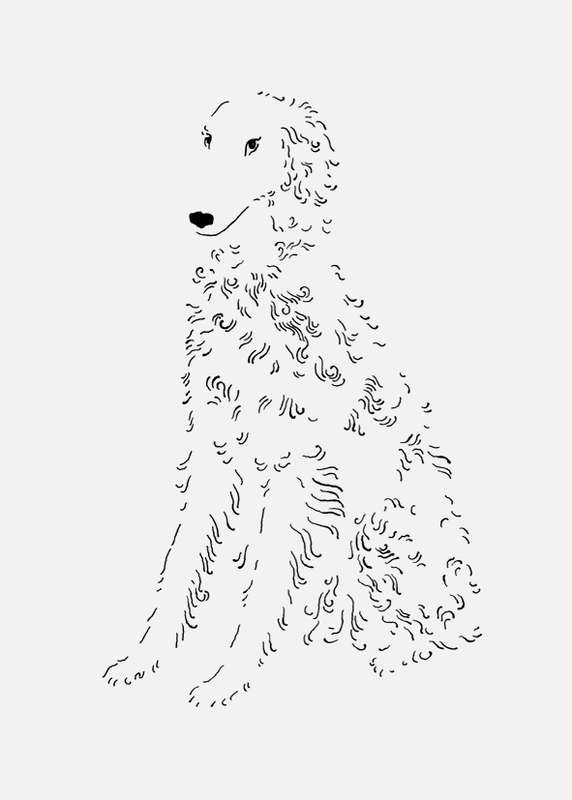 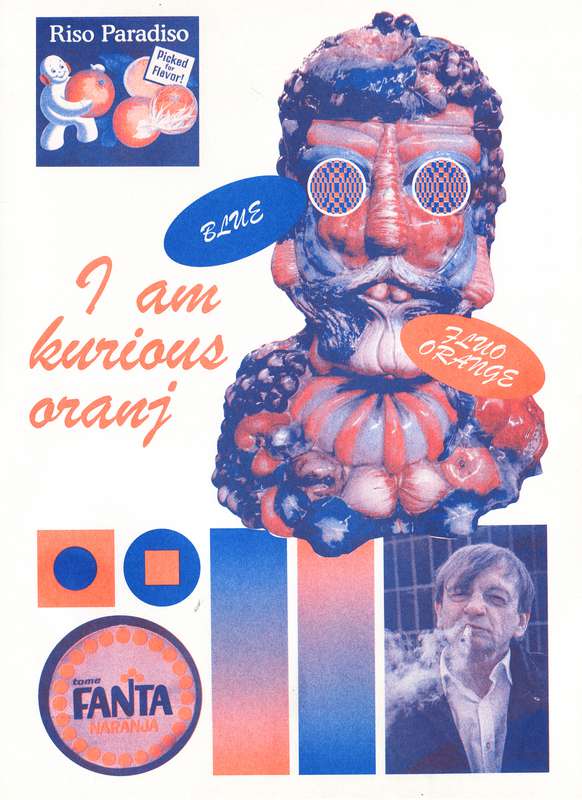 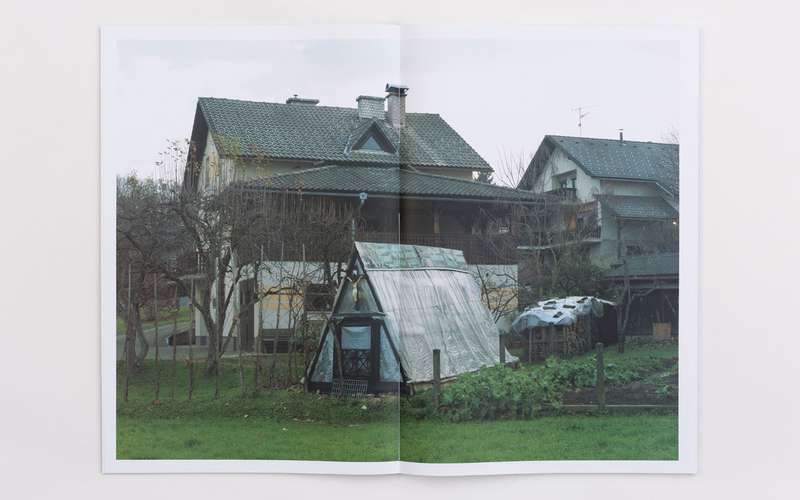 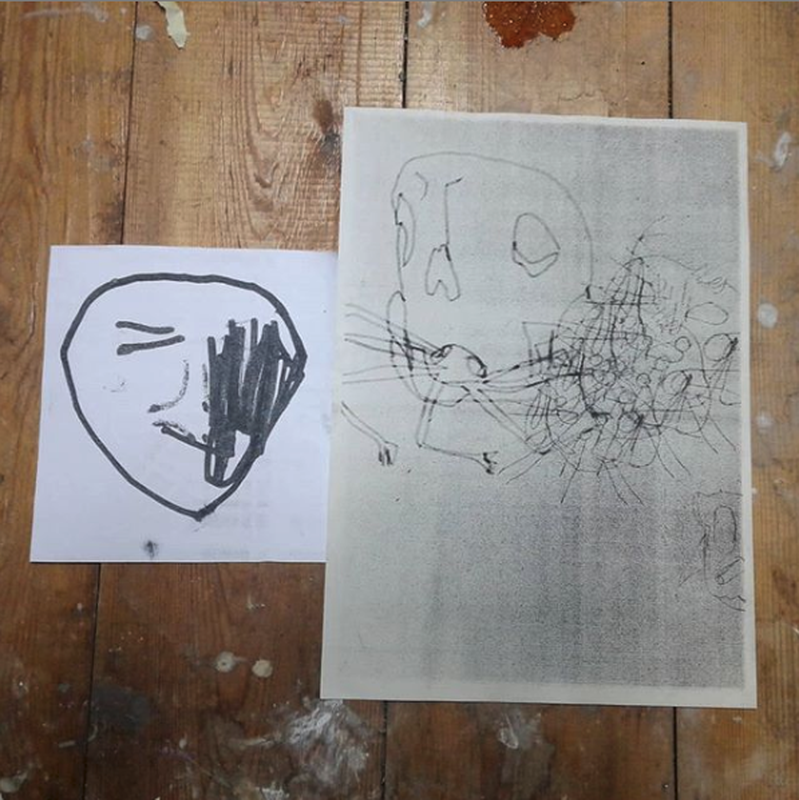 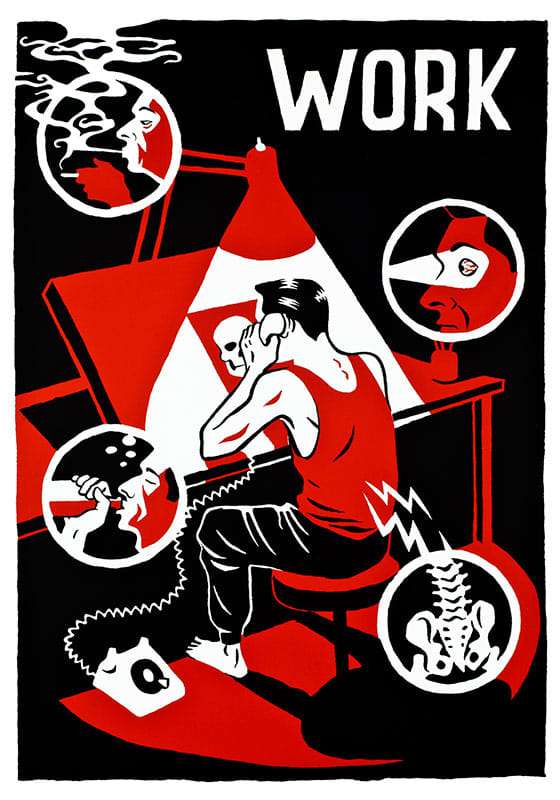 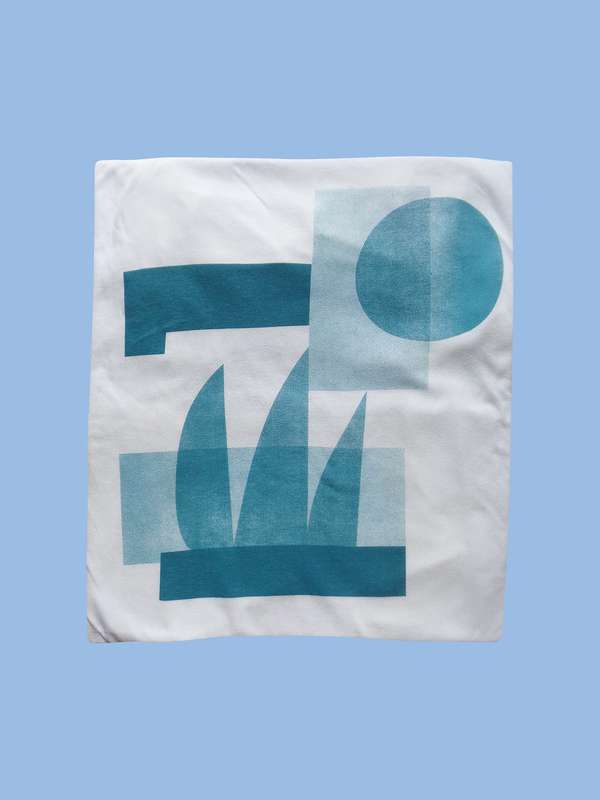